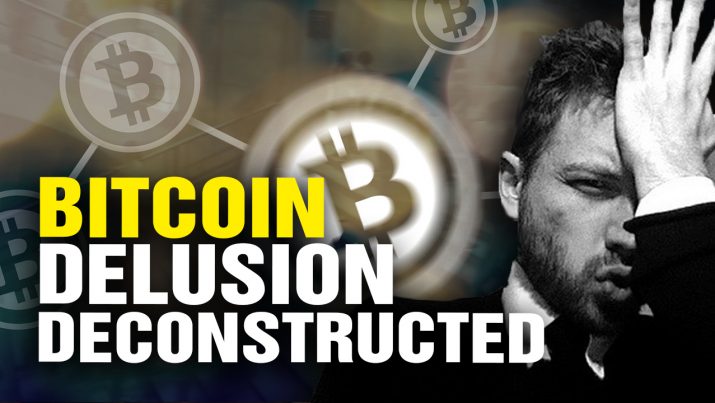 The Bitcoin house of cards continues to collapse at an accelerating rate, now plunging from nearly $5000 to about $3200, wiping out more than $23 billion in “assets” that foolish people deluded themselves into thinking was real.

As explained on Zero Hedge via iBankCoin.com (which has been zealously pro-Bitcoin, for the most part):

Let’s review the extent of the carnage inside of the dark, cavernous catacombs of the ICO world — a place where outright scam artists get rich by tricking people into believing their ‘coin’ will make them rich. This has never been about preserving value, supplanting fiat, but promoting a bubble that is backed by venture capitalists.

Let me repeat that for you thick brained f##k-sticks who think that by purchasing ETH or BTC you’re ‘sticking it to the man.’

Remember Uncle Fred Wilson, the man behind Twitter, Etsy, Zinga, and a slew of failed IPOs? Fred’s been involved in Coinbase and the blockchain since 2011. After Fred got in, his whole cadre of followers and sycophants followed suit. As of today, the industry is teeming with vultures looking to continue this Ponzi scheme — thrusted ahead by lunatics like John McAfee.

Here are some of the losers over the past 24hrs

I hate to see anyone lose money — but these people truly deserve to. They’re buying ‘coins’ with zero voting rights, zero regulations, zero oversight, zero compliance other than Github and Reddit peer review, and zero ownership in the companies they’re investing in. These ICOs are the ‘essence’ of the company and mean nothing.

The Reddit forums, as you would expect, are filled with people on suicide tilt, and true believers with confirmation bias who’re trying to say this pullback and China ban is a ‘good thing.’

According to various reports across the web, Bitcoin “dreamers” are practically on suicide watch at this point. Their stupid dreams of endless, perpetual money from nothing appear to be shattering. All these people who thought they were so brilliant that none of them would ever have to work again are coming to realize they’re just as stupid and foolish as their parents and grandparents who fell for the dot-com bubble, the housing bubble and every other senseless bubble that came before. (Because no, it really isn’t different this time, get it?)

Bitcoin is a Ponzi scheme. It’s a pyramid scheme that preys on people’s greed to part them from their money. To understand why, listen to my five most recent Bitcoin podcasts, below, and then read BitRAPED.com or BitcoinCrash.news:

Plus, here’s my studio video warning from three months ago, which foresaw everything that’s happening right now with Bitcoin: