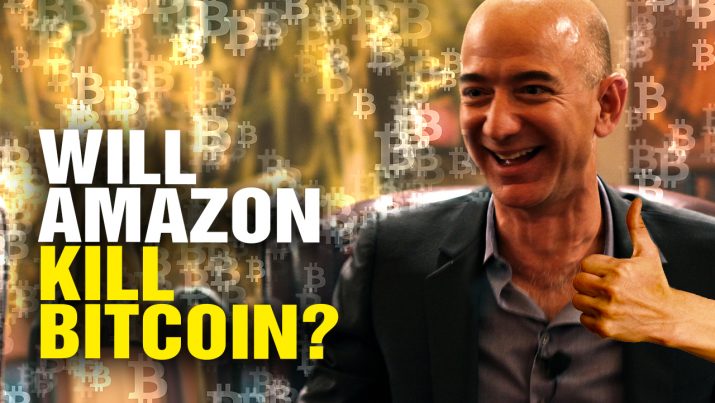 E-commerce giant Amazon may be eyeing its own slice of the cryptocurrency pie. The Jeff Bezos-owned mega-corporation recently registered three new website domains – AmazonEtherium.com, AmazonCryptocurrency.com, and AmazonCryptocurrencies.com – that suggest the company may be planning to unveil its own cryptocurrency in the very near future as competition to the ever-popular Bitcoin platform.

The three domains were reportedly registered on October 31 by Amazon Technologies, Inc., a subsidiary of Amazon.com, Inc. On several occasions in the past, Amazon Technologies has issued patent filings for technologies for products that were later adopted and offered by Amazon.com, which is why many now speculate that these domain registrations could point towards the soon launch of a new Amazon cryptocurrency.

Other information contained in the domain registrations shows phone numbers for Amazon’s legal department, though efforts by CoinDesk.com to make contact using these numbers have thus far been unsuccessful. DomainNameWire was the first to report on these developments, publishing screenshots of the registrations that show evidence that this is the real deal.

The site suggests that Amazon could be moving forward with efforts to safeguard its brand in this emerging sector, which it similarly did back in 2013 when it registered the domain name AmazonBitcoin.com. At the current time, AmazonBitcoin.com does not have its own site material, and simply redirects to the Amazon.com homepage.

Another possibility is that Amazon.com is simply trying to differentiate between other cryptocurrencies and the recently introduced “Amazon Coin.” This product was introduced back in 2013 as a payment option for online customers who opt to use it instead of other more traditional payment methods. It could also be Amazon’s way of launching its own cryptocurrency so as to avoid having to adopt Bitcoin.

“At this time, it’s not entirely clear what purpose the domain names will serve,” writes Stan Higgins for CoinDesk.com.

The world of cryptocurrency is fast-moving and changing by the day. To keep up with all the latest, check out Bitcoin.news.

While Amazon seems to be on the cutting edge of things more often than not, some industry insiders aren’t buying that the e-giant is readying to release its own cryptocurrency. The company has long been overzealous, so to speak, when it comes to defending its brand through domain name registrations that it doesn’t necessarily end up using as part of a product launch – a smart approach to take when you’re a company as big as Amazon.

Commenting on the matter, Ethereum cryptocurrency co-founder Joseph Lubin told reporters that he doesn’t see Amazon as necessarily leading the way in this regard. In grading the various tech giants on their readiness to adopt blockchain technologies, Lubin says he hasn’t really seen a whole lot of activity from Amazon other than the domain registrations.

“Amazon, we’ve not seen that much, so we’ll see,” he’s quoted as saying.

If anything, Amazon could be trying to protect itself from the cryptocurrency onslaught, which because of the decentralization benefits it offers reportedly represents a “threat” to nearly all of the major tech players. For this reason, many of them could simply be responding to the growing popularity of cryptocurrencies, a phenomenon that’s completely out of their control.

“Oracle is just starting on their blockchain journey,” Lubin added, as reported by Fortune. “Apple seems to be largely uncaring and unaware. Google is making investments, but it’s not clear that they have a lot of activity going on.”

As of this writing, Bitcoin has reached a new market value record of $7,450 per coin – this in spite of the fact that some see Bitcoin as just another fiat currency, in this case digital, that’s backed by nothing.